Yes, it is. And the CMIO ProtoBoard is a prototyping board for you to build circuits directly on with can be used with the CM I/O board and Compute Module.

Same as blinking an LED is the first code you write for a new embedded system, designing a prototyping board is often the first thing I do with every new system I work with.

Why, I hear you ask?

Some of the dimensions and connector positions I’ve had to guess at but here’s a quick layout of what I’ve done so far: 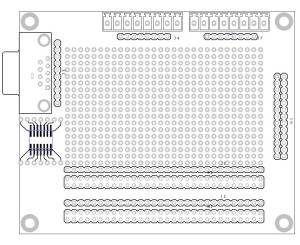