It’s been a while since we published any thing new for the RC2014 architecture.

A couple of important notes:
* Both ROM and RAM memories must be the same size.
** see explanation below

The option for either nMRD and nMWR (nRD and nWR or’ed with nMREQ) signals or nRD and nWR only signals when IC3 (74xx32) is fitted or not fitted allows for experimenting with other CPU Read/Write architectures.

Notably, the enhanced RC2014 bus features a 16-bit data bus. The card can use this enhancement by allowing the selection of the high or low 8-bit portion of 16-bit data bus. This allows the user to experiment with 16-bit CPU’s such as 68000 or 8086 when two cards are used together.

Last year Parallax released their latest multicore processor, the Propeller2 or P2X8C4M64P to give it, its full name. It’s been a very long time coming and after a few setbacks it is finally here. It’s specs are very good, featuring 8x 32-bit cores (or cogs as Parallax likes to call them), 512K RAM and 64 GPIO with SmartPin features.

I got my P2 evaluation system (ES) board a few weeks back and designed a couple of P2 ES prototyping wings to go with it.

The first prototyping wing (on the right) is a classic proto board with I/O from two GPIO ports. The other prototyping wing is a breadboard design for faster circuit build and test and features a 3x LED’s and 2x switches

I’ve got a few spare PCB’s which I’ll put on my Tindie store.

I’ve been busy with my big box of PCBs and I here’s my first Z80 system design and build. It comprises of the following: 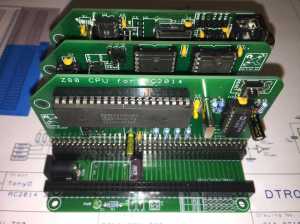 It’s pretty much a standard Z80 layout but I’ve expanded the bus to the latest Enhanced Bus definition for all the cards. The 5-slot backplane uses double row (2×39) female pin headers to include the RC2014 enhanced bus and in addition I’ve added an extra set of address lines (A16 to A23) for the possibility of using 16-bit CPU’s (8086/68000) and memory options (upto 1MB) in the future.

Here’s some pics of the various cards:

Retro Computing with the RC2014 Bus

I have very fond memories of using and building 8-bit computers during the 1980’s, so I’ve been following Spencer Owen’s RC2014 modular 8-bit computer project with some interest. For those interest the RC2104 is a simple but very modular 8-bit microcomputer based around the Z80 microprocessor.

In its most basic form it uses a number of single row 40-pin headers (or sometimes a 39-pin header) to make a computer backplane and which takes various “computer” and add-on cards to build a system. The add-on cards currently have a choice from various Z80 CPU cards, a 6502 CPU, various sizes of RAM and ROM memory cards, serial I/O and digital I/O cards.

I was fortunate to meet Spencer at Maker Faire UK back in April 2017 and chat with him first hand about the RC2014 project and he was very open and enthusiastic about sharing all aspects of his project. So much so, a small community of fellow builders has popped up and added to the project with their own add-on cards.

I’ve put together a short list of RX2014 related web-sites:

The WIFI enabled ESP8266 is one of those great chips to quote an old tradesman’s saying “it just does what it says on the tin”.

It’s only been around for a few short years but it’s made a great impact in the boom in WIFI enabled projects and products.

As well as WIFI the ESP32 also features:

With the ESP32 August release date fast approaching you can now find more solid information on its capabilities. Here’s a few links to wet your appetite:

This is a little late but I spotted this tweet from Espressif and a post on CNX about a new variation of the ESP8266 going into beta testing. The company announced the new chip which will support both Wi-Fi and Bluetooth Low Energy (BLE).

There’s not much more information other than it features a new 32-bit core, the Tensilica diamond 108 instead of the 106 and has 500KB of RAM.

The ARDvance-Pi is an advance Arduino training board. You can use it together with any of the Ardunio Uno or Duemilanove style of boards. The Arduino is plugged into the ARDvance-Pi and DIL switches allow the user to select which interfaces or circuits they want to connect to the Ardunio.

The training board has a number of interfaces

It was originally going to be called the ARDvance-10 but its name changed when I decided to add an interface port for the Raspberry Pi board, hence its new name ARDvance-Pi. Port Expanders, either MCP23008 or PCF8573 and a 8-ch ADC will also be added to allow I2C or SPI interfaces to be used from the Raspberry-Pi. When its finished, its hoped that the Raspberry-Pi can use the Arduino as a sort of slave I/O processor.

A tale of two boards

Lately I’ve been keeping my eye on two recent developments from Xmos and Parallax.

The Xmos staff are developing a Stamp (40-pin DIP package PCB) like board for their XS1-L1-TQFP48.

Mean while Parallax to support their Semiconductor spin off have brought a new Quick Start board of their popular Propeller P8X32A multicore microcontroller.

I picked up a Big Trak programmable vehicle from a car boot sale a few years ago where it promptly got lost in my to be used in a cool project (aka junk) pile. The recent Dorkbot @ Newcastle project session saw me dig it out of my attic with the goal of swapping out the original controller board an replacing it with an Arduino.

To make this work I needed a motor controller circuit to drive the wheels of the Big Trak. There are a number of Arduino motor controller shields I could have used but I already had a couple of ST L6203 H-Bridge Driver chips left over from a previous project so I put together a quick dual motor controller design using these.

A pdf of the initial schmatic design is here

XArduino – A 400-MIPS co-processor for Arduino

Recently I’ve been working on XArduino which is a XMOS XS1 L1 co-processor for the Arduino open-source electronics prototyping platform.

It features a standard XTAG-2 to for programming and debugging. In addition the XTAG-2 interface will allow for XK-1 boards to access the VGA and PS/2 interfaces as well as way of connecting standard Arduino shields.

The project is hosted at xcores.com/projects/xarduino 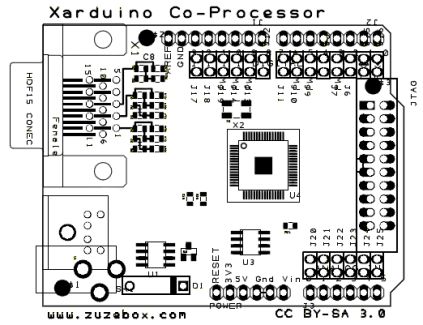